Crane Game Girls is an anime all about girls who play crane machines in order to save the world from destruction by asteroids. During the series they learn a variety of new techniques to make it easier to get prizes out of the machines. This is an example of the sort of thing which happens during the series 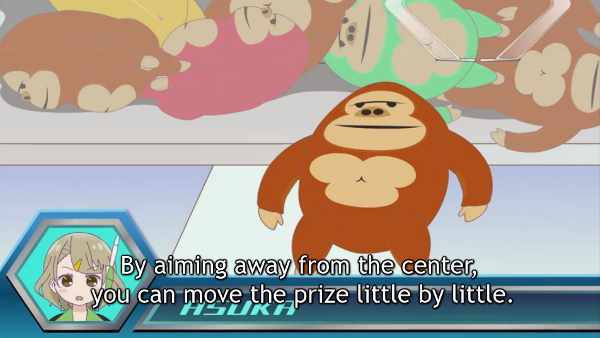 I’ve never really played a crane game as I assume that ‘the house wins’ otherwise they wouldn’t be so prevalent, and it wasn’t something I ever did as a child. However, now whenever I walk past one, I can’t help checking out the situation to see if one of the special techniques would make it easier to get the prizes out of the machine. I don’t want the prizes, and I don’t think I could win prizes anyway because of my poor co-ordination, plus I don’t know if the techniques could even be applied outside of the realm of fantasy, but this doesn’t stop me from staring and working out which technique I could apply for my best chances of success. In a strange way, this show has changed my view of the world. It’s probably a good thing the world isn’t relying on my winning prizes from crane games in order to save it from impending destruction.