This post is going to talk about Kuma Miko (Girl Meets Bear) in some detail including the series ending. If you’ve not seen the show and would like to, you may want to pass on this post!

Kuma Miko at first glance seemed like it would be like any other cute slice-of-life show with comedy elements, centering around the life of Amayadori Machi a 14 year old Miko living in a small village with her friend and companion, Natsu the talking bear. Machi wants to go to high school in the big city, but she’s totally inexperienced, so Natsu wants to make sure she’s ready for the wider world. Just like any other show is totally fine with me. I guess it’s like all the mediocre epic fantasy I read as a young teen, if it hits the expected notes well, it’s totally fine in my books. Known quantities can be comforting.

The first few episodes had the sort of tone that I’d expect, light-hearted humour based around social awkwardness, but as the series progresses, it seems that Machi is gradually less capable of dealing with her awkwardness, inexperience, and anxiety. This culminates in the events of the last couple of episodes where she goes to an idol contest in a large town. Machi overcomes her anxiety to the point where she can perform, but she’s so traumatised by the whole experience that she gives up her goals of leaving the village and becomes completely dependent on those around her. This was an anime-original ending, and apparently quite a departure from the light-hearted tone of the source material. 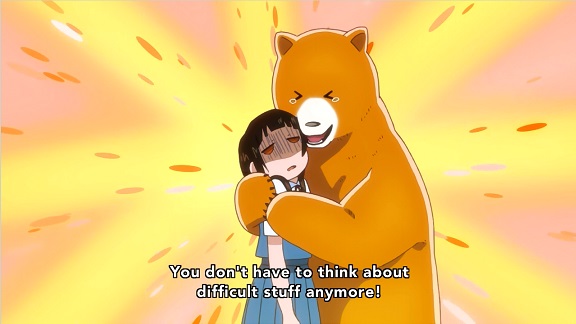 Social anxiety is a very real problem, and one which I’ve personally suffered from. Life can become totally paralysing at times and it can seem like even the smallest things can become a huge ordeal, let alone bigger events like Machi being called upon to sing in an idol contest owing to the misguided interference of those around her. Even with the stressful events of the final few episodes, it could have been an opportunity for Natsu and the others around Machi to wake up and see the difficulties she’s experiencing and give her support and understanding, as they were rather self-absorbed and self-serving prior to this point. It could also have been an opportunity for Machi to recognise that she’s struggling but that she can overcome things one step at a time. Anxiety doesn’t ever totally go away, but it’s something that you can learn to cope with and manage, and with the support of others make your life a little easier with occasional setbacks instead of being overwhelmed in a flood of stress. Instead of having some uplifting and encouraging themes, the show went for this rather dark ending which felt out of character with the genre and the rest of the show.

I’m not sure if the intent of the creators of the anime was to perhaps make some kind of commentary about how much viewers enjoy watching cute girls be awkward and how we’re in a sense gaining pleasure out of others vulnerabilities, or whether it was just a desire to have a decisive end to the season but the themes of the show weren’t exactly what the audience expected. It has actually made me a bit more thoughtful I think about the difference between what is played as being funny and what is truly funny, but if I had known about the show in advance, I wouldn’t have chosen to watch it.

At times, I definitely think the unexpected can be used to good effect (think about how much people rave about Madoka Magica for instance), but unexpected is definitely not always good. I felt this was a moment of the wrong kind of unexpected.