I’m thinking that my episodic posts for this show will generally be late in the week as the show airs mid-week, but I was waiting to check out all the shows I was interested in to see what I was excited about and would like to write about. So my episode 2 post will probably out later this week! Or it might not, there is a major heat wave where I live at present and it makes it quite hard for me to blog. If my posts disappear, they’ve probably evaporated into some kind of weird heat haze.

In this episode, we meet Nanase Morina a high school student who is looking for a summer job when she stumbles across the help wanted sign at the Trattoria Festa. She’s taken with the restaurant as it’s cute and close to home so she decides to apply. 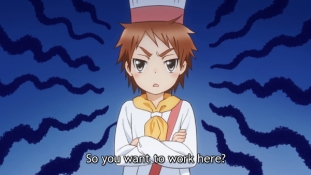 It would be great to just be able to walk into a workplace like this and be offered work! I don’t know about Japan but it’s certainly rarely that straightforward here. Morina meets the acting manager and chef Kitahara Maro who is upset that she’s applying to work in an Italian restaurant without understanding Italian, but the assistant manager Fujiki Ruri is much more friendly and understanding and offers her a job.

I am by no means an expert on Italian cooking (I’m not even a pasta expert, how shameful), but I’m going to do my best to talk about the food served up in the show each week, by doing a bit of research into the dishes and techniques. I’m hoping there is food each week, otherwise these posts will be really short (but still with great faces). 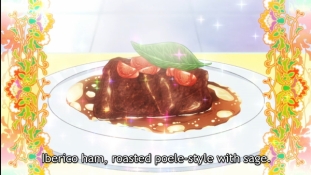 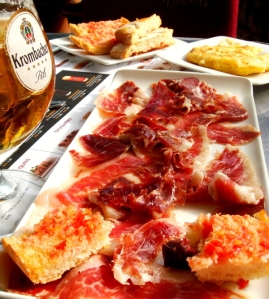 Image of Jamon Iberico by Evan from Paris, France taken from Wikimedia commons under a CC2.0 License

There are also lesser grades of Iberico ham available, which are apparently still good, but not nearly as tasty as the top-quality product. To roast meat poele style means it’s cooked in a heavy covered dish and basted with butter and its own juices throughout the cooking process. The name poele is a bit unusual in that whilst the name is French, in French it merely describes a kind of pot and not the cooking technique, it’s only in English that the French word is used to describe this cooking technique. It definitely sounds like the ham would be tender and tasty! 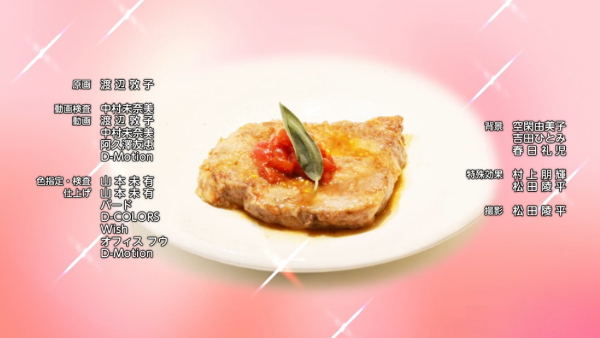 Apparently ham has shoujo sparkles even in real life

The ending theme Honjitsu no Tobikiri Buono! (本日のとびきりBuono(ボーノ)!) is cute and features a photograph of the Iberico ham dish. It’s a real shame that we don’t get karaoke subs, as it sounds like the lyrics may possibly discuss cooking techniques but my Japanese language skills are inadequate to actually tell what is going on.

There’s lots of lovely shoujo flowers and sparkles included in the visuals and a simple watercolour style. The animation isn’t super detailed, but it’s effective and looks pretty nice for a short! I especially love all the excellent expressive reaction faces and hope that these continue throughout the series.