I’ve been enjoying watching The Snack World recently. It’s a show made for children which ties in with Level-5’s (makers of Yokai Watch) latest franchise for Japan. It’s not been licensed by anyone for an English-speaking market, and I don’t believe that there are any plans to do so at present. This is the sort of series I enjoy and so I was watching without subtitles. It has recently been picked up by a fansub group though, and at the time of writing, there are subs for 2 episodes. As it’s now available to a larger audience, I thought I may give a bit of an overview of the series.

The Snack World is set in a world of fantasy which has some aspects which are similar to our own. The world is full of both slimes and smartphones, krakens and convenience stores. It’s a strange blend of modern and fantastic elements. It also heavily references western fairy tales and folk tales, so there are characters like Cinderella, Pinocchio, and Peter Pan, only a little different to the way you may remember them. It’s not a series which is super heavy on world-building and lore (the only details which have been carefully explained are the ones which tie in with the toys related to the franchise), but I think that excessive exposition is not needed and it’s been interesting picking up little hints about the way the world works as the series progresses. 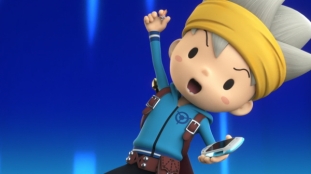 It’s also a bit different to most anime series, being animated in full 3DCG. It’s very unlike most CG anime productions too, as instead of trying to emulate a 2D style, the designs are reminiscent of claymation. It’s interesting watching some anime reaction staples (like super-deformed characters to show reactions) translate to this 3D world.

It follows the story of a band of hapless adventurers; Chup, Mayone, Pepperon, and Gobson, as they take on some ridiculous quests. I’ve been enjoying the fact that it showcases persistence as the heroes fail in a variety of different (generally amusing) ways before they succeed at a task. It’s a high-energy adventure story with some great visual comedy and puns.

Even though there are no current licensing plans, there is for some reason an official English-dubbed trailer for The Snack World, which is basically a digest of the first episode.

It’s not an outstanding series, but I have found it highly entertaining. If you enjoy children’s comedy, or a lively fantasy adventure, The Snack World may be worth a taste! 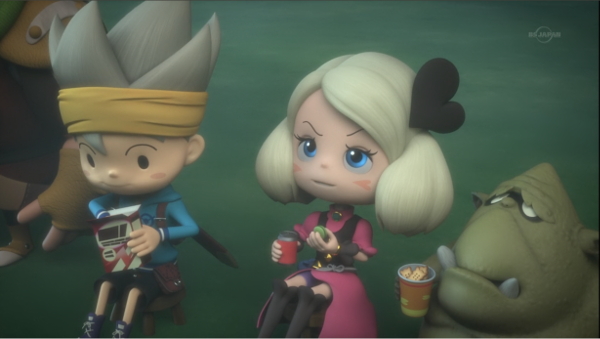 8 thoughts on “Finding A Tasty Adventure in The Snack World”